As part of my work making an SRD for Mini Six I was reminded that in the Perdition sample setting the character templates for the Pilot and the Mechanic are identical, which seems odd. Here, take a look: 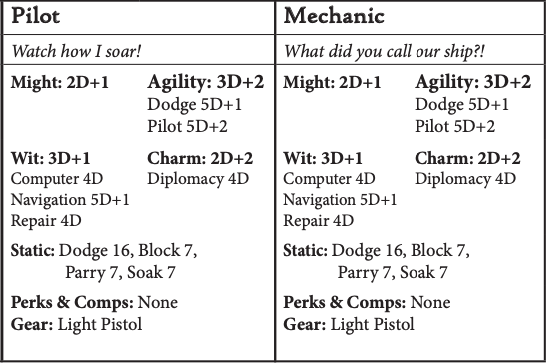 Mini Six’s Pilot and Mechanic, from the Perdition sample setting

Here’s a version of the original Mechanic in text format:

Still has some skill at Pilot and Navigation, but not as good at those as the Pilot. Better Computer and Repair skills. Probably willing to pick up a pistol and shoot it if really necessary, but also probably no better at it that default, so Pistol isn’t listed.

What do you think?

Interestingly, the Pilot and the Mechanic templates are built on 12D in attributes and 8D+2 in skills, instead of the standard 7D in skills, so I made this alternate version with the same amount. I haven’t checked the other templates. (I’ll probably do that at some point. Rather than do the counting manually, I’ll probably type them up as YAML and feed them through sm6, a program I wrote that counts the costs of all the dice and prints out a summary. I’ve got a couple other programs, sm6rst and sm6troff-ms that can read that same YAML and produce output in reStructuredText or troff (T1, G1) formats, for including in my documents.)

I've also posted this question at a few online forums: the /r/OpenD6 and /r/rpg subreddits, the RPG Pub, and rpg.net, which I'm listing here so I can be reminded of them.